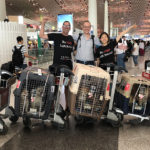 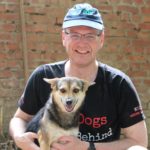 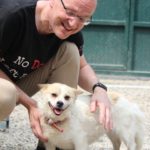 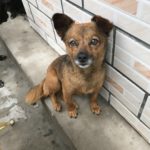 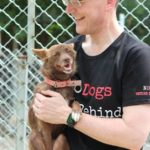 ARF’s Scott Howe with some of the recent China rescues.

Late on Tuesday, July 17, ARF Executive Director Scott Howe landed at JFK from Beijing with ten dogs saved from China’s dog meat trade and the annual Yulin Festival. Two of the dogs already had new families waiting for them and the remaining eight are safe and sound at the ARF Adoption Center. Like all the animals we adopt, these new arrivals will be kept under the watchful eye of our medical team before being made available for adoption. Our “View Our Pets” page of adoptable animals is updated daily!

ARF first received dogs saved from China’s illegal meat trade and the annual Yulin Festival in 2016, taking in 21 dogs brought to the U.S. by international organizations and the local Rescue Paws Foundation founded by Candy Udell. The heroic work of the rescuers in China has continued, and on July 13 ARF Executive Director Scott Howe flies to Beijing to bring back ten dogs saved from Yulin over the last year.

The organization No Dogs Left Behind (NDLB)- the non-profit based in China, which was founded by Jeffrey Beri as an outcome of his firsthand experience of rescuing at Yulin in 2016 – contacted ARF in May to ask if we had capacity to help again. The commercial flight to transport the dogs had been donated by Candy Udell and the Rescue Paws Foundation, but NDLB still needed a flight volunteer to fly to China and escort the dogs back. ARF’s Scott Howe said yes.

“ARF was founded to help the needs of homeless animals in our own community, and we strive to do that every day. Over the last 44 years, our community has also helped us grow and extend help to communities where there are more animals than homes and where there aren’t enough resources to help. Our willingness to take ten dogs from China is a small fraction of the animals we will save this year, but to this new generation of advocates for animals in China, ARF’s help gives them hope.”

For more information on NDLB, and to support their work, visit nodogsleftbehind.com. To sustain ARF’s commitment to rescuers in communities struggling to help their animals, please consider a donation.