At ARF, we like to think that every day is a potential happy ending just waiting to happen for one of our animals, particularly for animals that come to us with serious medical issues. 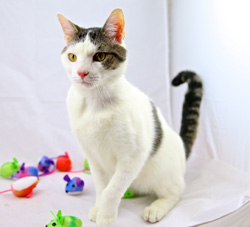 That happy ending just arrived for one very special kitty. A while back, we told you the story of Bonkers. Bonkers was rescued from Brooklyn Animal Care and Control after he was found lying on the street, having fallen out of a high-rise window. His jaw and most of the bones in his face were broken. Facing certain euthanasia, our Director of Operations learned of his plight and had 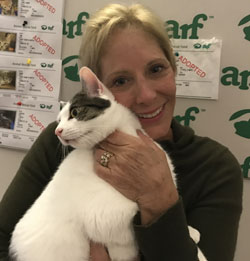 him transported to ARF. Once here, our veterinarian worked tirelessly to reset his jaw and fix his broken bones. For months, animal care associates fed him through a syringe and monitored his progress. Through a rigorous course of antibiotics and pain meds, he slowly healed, so much so that he was finally able to eat on his own. He recuperated in a cage and as soon as was deemed 100% recovered, was released into our cattery where he ran around with all his new kitty buddies. Recently, our dream for Bonkers finally came true — he found his forever home. Enjoy your new life Bonkers; you have at least 8 more of them to go!

However, sometimes all the medical care, love and attention we can give is just not enough. 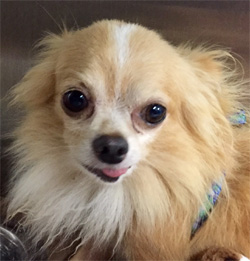 Such is the story of Garrison. A handsome, sweet, 8 year-old Pomeranian, Garrison was rescued from a puppy mill. When he came to ARF in August he had a host of medical issues, which we successfully treated. What we couldn’t repair was his chronic heart condition. Sadly, his long-term prognosis was not promising. While we were not able to resolve all his health issues, we made him comfortable while our adoption team searched for an adopter who might be willing to give him a home for however long he may have. That special person soon came forward. She is a previous adopter of two ARFans, including Bud, a dog we discovered to be in the last 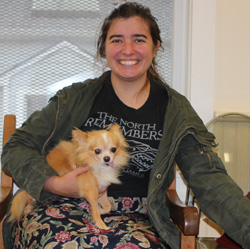 stages of cancer when he came to ARF earlier this year.

Today, we are overjoyed to report that Garrison, now Little Ritchie, has settled into his new family and is enjoying life. The family loves him dearly and he will be happy for the rest of his days.

This is the kind of lifesaving work that we continue to do with your support, and these are the kind of adoptions that remind us there is someone special for every dog and cat we save.